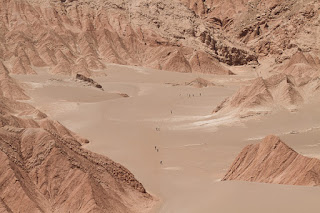 After many requests and questions I've been persuaded to write a wee blog thing on my recent adventure in the Atacama Desert in Chile. I'll try and keep it relatively brief and answer the more common questions.
I'm not going into the daily pains,  injuries, illnesses, vomiting, diarrhoea, tiredness etc. You get all these things in ultras and if a gory read is needed, it's all in my other blog from 11 years ago when I did the Marathon Des Sables    A long read:-   http://donaldsandeman.blogspot.co.uk/.

I've completed lots and lots races of different degrees of difficulty and in a various different countries.  I had read that the Atacama was one of the best places to run in the world and this was confirmed by a few friends who had done it previously .   In 2006 I did the MDS to celebrate my 50th birthday.  This one fell just before my 60th . I've travelled a lot but had never been to South America.  I thought I'd be able to combine it with a long term dream holiday in Patagonia so it was quite easy to persuade myself.   Elaine was originally going to join me after the race but I persuaded her to apply for a position as a race volunteer which was accepted.  She's going to do her own blog detailing an amazing experience. 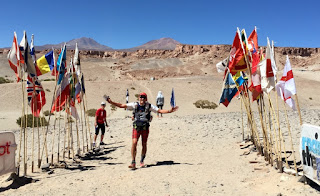 The race is part of the 4 Deserts series.  It's organised by a Hong Kong based company who annually hold similar races in the Gobi Desert, Namibia and Antartica.  The race is held over seven days but in reality it's more like six marathons over five days.  It starts with a 22 mile stage followed by three stages of around or just over marathon distance and then a fifth day of around 50 miles.   You then get a rest day (although many runners were still completing the long stage) before a 10 k stage to the finish.  Not huge distances compared with my normal races but very hard conditions
You carry all your equipment and food for the week in your backpack.  The organisers provide basic tents, which you share with six or seven others, and water.  The race is made considerably harder by the huge variations in terrain, altitude, (about 10,000 feet) and the extreme temperatures. The cut offs for each stage are very generous and the organisers are keen for as many competitors as possible to finish.

All who know me are aware that I'm not really in to hard training. I just like to race  but as a person who enjoys life and likes to partake in the odd glass or two I did feel that I did as much as I could reasonably expect out of myself ( I didn't get injured).     I completed a barrow load of ultras, and a few marathons, throughout the year and even clocked up my 100th at the Devil in August.  At one point I did 5 ultras in 5 weeks trying to get used to quick recovery.  I increased the weight of my pack lugging numerous plastic bottles of water around and tried to wear it as often as possible.
The mandatory equipment that you have to carry is extensive with cold weather clothing, warm sleeping bag, medical and survival gear and even waterproofs despite the Atacama being the driest place in the world!  By far the heaviest item is food which was mainly high calorie freeze dried packets.  You're required to take a minimum of 2000 calories a day but being a hungry, greedy git I took about 3500 per day.  Even with that I would be burning a lot more calories than I could consume and ended up losing a fair bit of weight.
I tried a few different packs but struggled to get a light one, strong enough for the weight.  I eventually settled for a 30 litre Raidlight but had to re-enforce the seams which split. I also carried a large bumbag which was ideal for snacks and bits and pieces needed for the race without having to stop and rummage in the backpack.  I was pretty chuffed to be able to keep the final weight down to about 10 kilos although carrying up to 2.5 litres of water increased this considerably.

This was a bit of a nightmare; It involved 4 flights via Edinburgh to Heathrow to Madrid to Santiago and then to Calama.  A long bus journey then ensued to the desert town of San Pedro de Atacama where the race was based.  I was paranoid about my luggage going missing so wore or carried nearly all my race kit.  This had the advantage of making fellow competitors easily identifiable as they were all doing the same. We arrived 3 days before the race giving a chance to try and acclimatise to the altitude and heat. Elaine also had a full days volunteer training on the Friday before the race. It was a great chance to meet up with fellow competitors at the race hotel. Out of the 123 starters there were 40 different nationalities and every one of them seemed to be an eccentric character (In a nice way)
It did surprise me that I seemed to be the only one frequenting the great wee beer bar though. The surrounding area was amazing with dozens of snow capped volcanoes up to 20,000 feet high.


THE RACE
The Saturday was spent with briefings from race directors and medics and then strict equipment checks before being bussed into the middle of the desert for our our first camp . The scenery was stunning and when it got dark the star show was jaw droping. I was delighted to discover that the other 5 occupants of my tent were fantastic nutty characters and were great fun for the rest of the week. I spent a lot of time carefully taping my feet and toes.  Best thing ever. 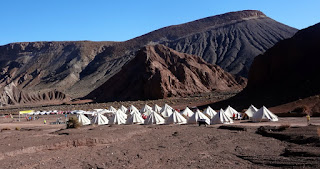 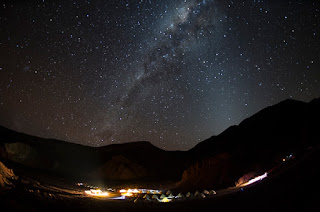 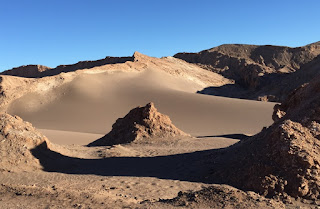 Unfortunately when it got dark it got cold.  Very very very cold. Trying to sleep was really difficult even with the sleeping bag and wearing every item of clothing in my possession.  There were bonfires in the camp maintained by some local guys and hot water for your food (not washing) was always available at the camps.  Every day had a similar routine with most folk started to get up from about 5 am and faff about heating food and preparing their race pack.  Portaloo toilets were provided at every camp.  These were probably the least enjoyable experiences of the week.  A race briefing was held about 07.30 explaining the hazards and terrain of the day ahead and at 08.00am every day the stage started 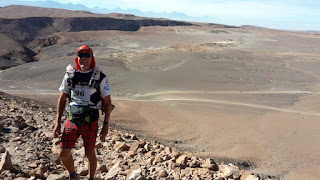 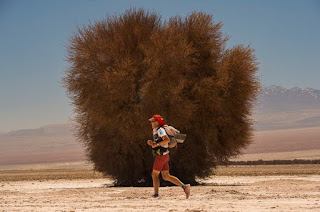 It was still very cold for the first hour every day.  By 9 it was pleasant.  By 10 it was very hot and by early afternoon it was almost unbearable. For the first couple of hours on day 1, I was really aware of the altitude and felt quite breathless but it soon passed.  I kept my pace comfortable throughout and walked all the uphills. When it got very hot I was only able to manage a run walk.   Every day the terrain changed dramatically. In fact probably every 10k or so. The first three days probably had the most spectacular scenery but it was all good 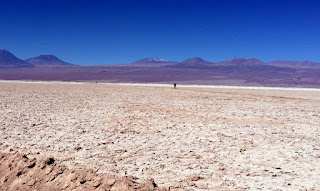 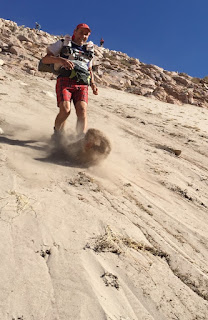 All the surfaces presented their own challenges.  Some parts had a crusty mud surface which broke when you stood on it and your feet sank in a couple of inches. With the heavy pack it was very hard going. Other parts had a hard mud or rock describe as similar to running on frozen broccoli or cauliflower. You regularly stubbed toes on this. There were long sections of slate like rocks that you had to jump across. There was one day of long salt flats as far as the eye could see. You could even make out the curve of the earth.  The white salt reflected the heat and you could only dream of shade. On one morning the route went down 8km down a river of snowmelt in a narrow canyon. It was amazing but tough fun 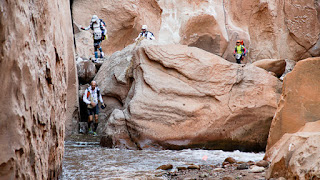 My favourite terrain were the miles narrow slot canyons and dried up river bed. The worst by far was the deep sand and dunes.   I didn't expect as much sand as the Sahara and should have had full gaiters instead of the clip on short ones.  The dust just came straight through the material of my Hokas and I had to stop and empty them every kilometre.  It was like running in a pair of shoes 3 sizes too small.  Cheerio toenails.  The Hokas also failed miserably when the soles melted and by the 2nd day had been totally destroyed. Eventually I had to duck tape them together

Running down the dunes was fantastic.  Trying to climb them was so very hard and was often only possible with a hands and knees crawl.  Unfortunately the sand was so hot that this wasn't possible after all.
The long stage was indeed a long day but not as hard as I expected. I had a lot more experience of long single stage races than most of the other competitors and was able to finish it in around 13 hours It was generally fairly flat and by the time it got dark the surface was all desert roads rather than dunes or rocks.  We then had a rest day although a few of the competitors didn't finish until well into the morning.  The race then finished with a short 10 k sprint back to the spectacular finish in the main square in San Pedro where beer awaited prior to an excellent banquet and party at night.

I was pretty pleased with my effort.  I had three targets
Bronze:  Get to the start uninjured
Silver:    Finish
Gold :     Top half finish
I paced myself well avoided blisters and steadily improved my position each day finishing 38th out of the 123 starters so gold it was .....woo hoo! 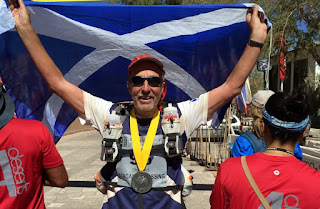 HOW TOUGH IS IT?

So hard to say with any race. The cut offs are so generous. They really try to get as many as possible to finish. It's almost impossible to compare a multi stage race with a single stage. I can only compare it with the very hard 2006 MDS which I still consider much the hardest race I've done.   It wasn't as hot (but colder at night)  Atacama scenery was far better and the small size of the field made it much more intimate getting to know nearly everyone. I feel Tranvulcania and a couple of my West Highland Ways may also have been harder.  This was certainly the most fun.  I never thought at any stage that I was going to die.

HOW EXPENSIVE?
Massively expensive . $3,700 US entry fee plus flights, insurance and gear but when you see the organisation you certainly don't feel you're being ripped off.  In fact worth every penny. Many vehicles, about 30 volunteers and 5 top medical doctors to give you first class safety cover.  It was so good I've decided to enter the sister race in the Gobi Desert in June 2017